Miss Hughes is an Obstetrics and Gynaecology registrar working in the North West London deanery. Having completed her medical degree at the University of Oxford she has gone on to pursue a career providing care for women at all stages of life, including pregnancy and childbirth. She is now lead clinician at My BabyManual, working with healthcare specialists and mothers to produce relevant and informative patient-centred content. Her specialist interests include fertility and minimal access surgery. She is also expecting her first baby in December 2020! 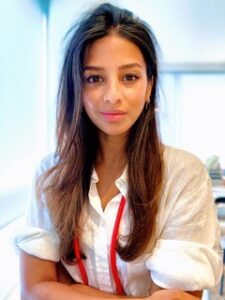 Hormones and the Menstrual Cycle

The length of the menstrual cycle is the number of days from the first day of your period until the day before your next period. We used to think that the average menstrual cycle was 28 days long. Recent evidence, however, shows that only a minority of women (13%) have a textbook 28-day cycle and actually a normal cycle is anywhere between 21 and 35 days long. Also, it is normal for a cycle to vary in length; it may come a day or two earlier or later each month.

The role of hormones in the menstrual cycle

FSH and LH: Starting at puberty, the pituitary gland in the brain releases follicle-stimulating hormone (FSH) and luteinising hormone (LH). On day one of your cycle, or the first day of your period, these two hormones are starting to rise. FSH acts on the ovaries to cause the small fluid filled sacs (or follicles) which contain eggs to grow and mature. This is why the first half of the menstrual cycle is referred to as the follicular phase – it is actually all about getting an egg ready for ovulation.

Oestrogen: As the follicles grow, they start to produce oestrogen. This hormone sends a signal which results in the womb thickening its lining in readiness for the implantation of an embryo. The bigger the follicles, the more oestrogen they produce. The higher oestrogen also causes the FSH and LH levels to fall so that only one or two follicles (the “dominant” follicle) keep maturing to produce an egg.  When the brain detects a high level of oestrogen it releases a sudden surge of LH. This very high LH level causes the dominant follicle in the ovary to release an egg; this is what we know as “ovulation” and occurs 12 to 48 hours after the surge. Ovulation usually happens two weeks before your next period. Interestingly, the ovaries often take turns doing this by alternating each month. However, if you only have one ovary, it will do all the work itself and release an egg every month. Some women may feel a little pain during ovulation as the fluid released irritates the pelvis. There are also other subtle changes you can detect to track ovulation, such as an increased temperature or changes in cervical mucus. The LH surge can also be detected in your urine using home ovulation kits.

Progesterone: The empty dominant follicle is still important and is now called the corpus luteum – the name is descriptive and literally means “yellow body”. It produces progesterone, the hormone which has the important role of maintaining the thick and inviting lining of the womb to receive an embryo. The second half of the menstrual cycle is called the luteal phase and is named after this important structure. The corpus luteum can only survive for about 14 days, after which progesterone levels rapidly fall and the lining of the womb is shed as a period. The lifespan of the corpus luteum is why the time between ovulation and the period is similar in most women. It’s actually the first half of the cycle, the follicular phase, which differs from woman to woman and determines the overall length of a menstrual cycle. When progesterone levels are low, FSH and LH begin to rise and the cycle starts again.

If the egg is fertilised, the embryo produces human chorionic gonadotrophin (hCG) which keeps the corpus luteum healthy and producing progesterone until the baby’s placenta is well-formed and can take over.  HCG is the hormone detected in the urine on home pregnancy tests and can be detected as early as 7 days before you miss a period. See pregnancy tests.

Infertility is defined as the inability to get pregnant after one year of regular unprotected intercourse. About 1 in 6 couples will experience problems with their fertility. The good news is about half of these couples can conceive on their own after some simple advice or treatment.

Hormone imbalances in the woman account for 20-30% of cases of infertility. They often do not cause complete infertility (i.e. no chance of conception) but rather a reduced chance of conception in each cycle. This is because problems with the menstrual cycle result in reduced frequency of ovulation or no ovulation at all. With fewer or no eggs being released, women will find it more difficult to get pregnant.

How to spot if hormones may be out of balance

For most women, having regular periods every month can mean that regular ovulation is occurring. Irregular or absent periods may signify a problem with hormones and thus ovulation. Having a very long cycle (six weeks to six months in length) is known as oligomenorrhoea. Having no periods for six consecutive months is known as amenorrhoea. If you fall into one of these categories, it can be presumed that there is a problem with your ovulation.

Depending on the cause of absent or irregular periods, women may also notice other symptoms, e.g. weight gain/loss, body hair growth, fatigue, night sweats or hot flushes. It’s worth noting these symptoms down as your doctor will want to know about them.

Polycystic ovary syndrome (PCOS) accounts for the majority of women who are having problems with their ovulation. This diagnosis covers a large spectrum of symptoms and includes women with:

Having just one of these features does not equate to having PCOS and at least two out of the three are needed before a diagnosis is considered. There is usually also some insulin-resistance which results in the body struggling to manage sugar intake. These women may gain more weight and have the early-stage features of diabetes. In PCOS, the hormonal imbalances mean that the follicles never complete maturation and no dominant follicle forms. Therefore, there is no mature egg to be released at ovulation, resulting in “anovulatory” cycles. The arrested follicles resemble a string of pearls in the ovaries, i.e. they are composed of several small fluid filled cysts all around the edge of the ovaries. For more information see polycystic ovary syndrome.

If you aren’t having regular periods, it’s worth seeing a doctor during the early stages of your attempts at conception. They can arrange hormone testing via a simple blood test, though the time of the month at which some of these tests are taken is important.

FSH/LH: These are probably the most useful tests for deciding on what type of hormonal problem someone has. If the levels are very low, it means that the menstrual cycle does not start each month and no eggs are recruited to develop in the follicles. If the levels are very high, this tells us the brain is working extra hard to tell the ovaries to wake up, i.e. the problem lies in the ovary. An abnormal ratio of FSH/LH may suggest Polycystic Ovarian Syndrome.

Progesterone: Progesterone is used to confirm ovulation as it is produced by the corpus luteum, the empty follicle that releases the egg. Even if you have regular cycles, a doctor might still want to confirm ovulation. This test is done half way through the luteal phase of your cycle, i.e. one week before your next expected period. In a 28-day cycle, this is day 21, hence why the test is often referred to as a day 21 progesterone level. If you do not know when your next period will be, this may involve weekly progesterone levels.

A good level on day 21 is at least 30nmol/L. However, as the day of ovulation is based on educated guessing and the test may not be exactly in the middle of the luteal phase, a level of 15nmo/L can be used to diagnose that ovulation has occurred. If the level is low, your doctor might want to repeat it next month to confirm whether you are not ovulating or have simply been tested during an anovulatory cycle.

Even if ovulation is confirmed, lower progesterone levels can mean that the luteal phase of your cycle may be shorter, allowing less time for the fertilised egg to implant.

Oestrogen: If oestrogen is normal, this suggests that the ovaries are healthy and capable of producing eggs. An abnormal level of oestrogen can only be interpreted with the FSH/LH levels. If the FSH/LH levels are low, then the oestrogen may also be low as there is no brain signal to the ovaries. If the FSH/LH are very high, then there may not be any eggs left in the ovary to produce the oestrogen, i.e. natural age-related decline, the menopause or premature ovarian failure. Symptoms of low oestrogen include vaginal dryness, hot flushes and night sweats, fatigue and absent periods.

Prolactin and TSH (Thyroid Stimulating Hormone): these are hormones produced by the brain, and although they are not directly involved in the menstrual cycle, when they are abnormal they can result in menstrual cycle dysfunction.

Testosterone, androstenedione and DHEA: these are all hormones that may be elevated in Polycystic Ovarian Syndrome (PCOS).

There really isn’t a one-size-fits-all treatment for women with ovulation disorders. Instead, treatment should be tailored to the individual woman and her hormone imbalance. Also, it’s possible that there will be other factors (e.g. sperm quality or fallopian tube blockage) that may be contributing to reduced fertility and these will also need to be investigated before starting on any treatment.

Generally, however, making sure that your BMI is within the healthy range, adopting healthy lifestyle habits and trying to minimise stress can all help to regulate periods and therefore ovulation. In women with PCOS, even a modest weight reduction of 5 to 10% can significantly improve their chances or natural conception as well as response to treatment. For more detailed treatment options for women with PCOS, please see Polycystic Ovarian Syndrome.